Natural bracing is a simple concept – but yet it is bringing about a mini-revolution in our understanding of tree assessment and management, as well as explaining the origins of most bark-included junctions in amenity trees.

A natural brace is a physical connection made above a branch junction (or crotch) in a tree that affects the loading at that junction. Figure 1 shows a typical association between a natural brace (in this case, a lateral branch) and a bark-included junction formed below it, in European beech (Fagus sylvatica L.). Because the natural brace is in place, there is not normal movement at the junction and this will limit the development of the critical joining tissues typically formed under the branch bark ridge (BBR).

Contrast the form of the junction shown in Figure 1 with a branch junction with a well-developed BBR (Figure 2). In the latter case, the natural loading from the two limbs has ‘informed’ the tissue development and there is a long BBR which contains dense wood with an interlocking wood grain pattern that gives this normally-formed fork a sufficient level of toughness and strength.

I first uncovered the association between natural braces and the formation of bark inclusions in trees through a survey of a large cohort of trees in April 2016 – and quickly realised its repercussions for tree management – as well as for teaching. 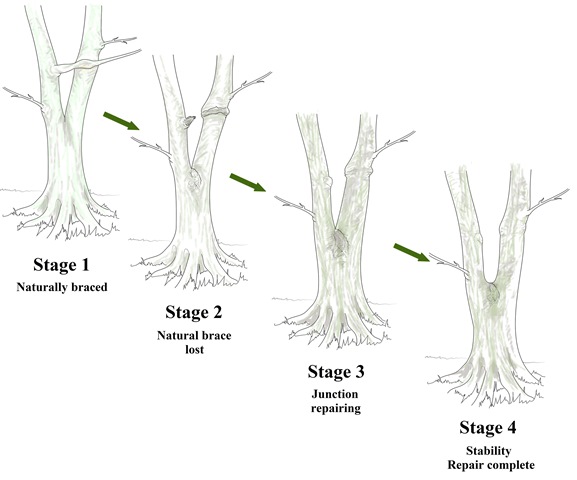 The diagram in Figure 3 shows the process that I got to see by surveying many hundreds of trees. First, natural bracing may start above a branch junction – most often by a side branch touching across to another side branch or the stem. This bracing action stops dynamic forces acting on the junction. If the two arising limbs from this branch junction are near-to-vertical, then there is little static loading acting across that junction as well, so the junction is not exercised and the BBR does not form properly. In the second stage of the diagram, the natural brace is lost – either through continuing development of the tree and loss of the branch from self-shading – or due to pruning. At the third stage, the junction has now been released to movement and mechanical loading for some time and the junction usually starts to form bulges of wood either side of the bark inclusion to compensate for the heightened levels of strain experienced at the junction. If the junction does not fail (many factors would affect the rate of junction failure – the severity of storms soon after the loss of the natural brace being a major factor), then it may form a compensated junction that has a cup-like shape: a junction type that I refer to as a ‘cup union’.

That is a very brief outline of the research – more can be found in my publications. There are two main lessons for the arborist here: i) that early formative pruning should target minor side branches that may touch across and cause a bracing effect above a branch junction; ii) if a natural brace has been in place for many years and is set above a bark-included junction – the arborist needs to take this into account and plan carefully how the situation is to be managed. Natural braces come in many forms (Figure 4 shows some examples), of which entwining stems and fused branches are the most sustainable forms of natural brace – other forms are more problematic.

My research work on natural bracing continues: I have just recently been the first person to intentionally create bark inclusions in trees (by statically bracing young branches in Populus) and we have done some rupture testing of branch junctions with or without their natural braces being present in hawthorn (Crataegus monogyna Jacq.). Stay tuned – there will be more reported findings from this research soon.